*Tip: when diving or snorkelling, don’t touch anything and keep your limbs away from the coral. Many species of coral are venomous in order to protect them from predators. Pretty to look at, not to touch. 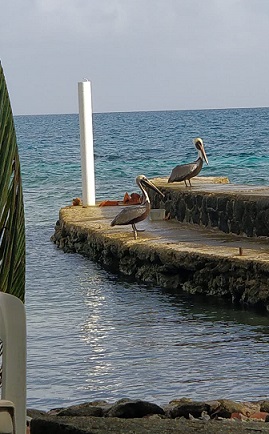 Bad things come in threes so they say. One of the younger volunteers started the day early with a spot of paddle boarding. He stood up on the board while still in the shallows and fell in and cut his knee open. It was a deep gash and needed stitches. Frank the director patched him up and once the boat was back from the first dive he and Cheeks the captain took him to Placencia on the mainland to see a doctor.

The unexpected change in plans meant that the second dive of the day had to be off the shore rather than on a different part of the reef as we didn’t have the boat. Every week on a Wednesday they do a night dive, so there is a long afternoon as the third dive is much later than usual. 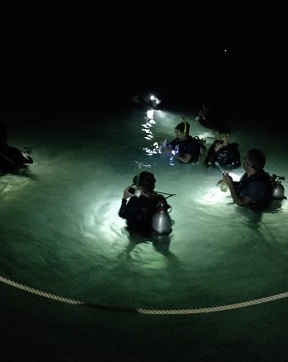 Cheeks took a group of us out on the boat as he was now back from Placencia, and we went for a snorkel. It was amazing what could be seen at such shallow depths. In some places the coral was so high that it made the water rather shallow and as a strong wave pushed me along I managed to hit my knee on something. It hurt a bit and I looked down to see it was bleeding a little, I had grazed it, that was all. While being in the water for almost an hour, I felt the sting of the salt water on it come and then go as the cooler water in the deep calmed it. I saw brain coral, fan coral and fire coral as well as sponges, parrot fish, angelfish and surgeon fish of all different colours.

When it was time to head back I got out of the water and looked at my knee which by this point had stopped hurting, it was bleeding and very inflamed, I had scraped it on some fire coral. Matt, one of the dive masters washed it with clean water and then alcohol which REALLY stung and then burned and I learned where fire coral gets its name it’s not just from it’s looks! It felt like I had a badly sunburnt knee for the rest of the day. The inflammation went down in about 3 hours by which time I realised I hadn’t taken a picture!

The night dive was scheduled for 7pm, which is usually dinner time on the island, so dinner was pushed back to 8 and we had a snack at 6 to tide everyone over. The chef had made tortilla chips from scratch, queso sauce and lionfish ceviche made using the lionfish the group had caught the day before. It was very white and had a meaty texture, not unlike monkfish but it didn’t taste particularly fishy, quite mild in fact. 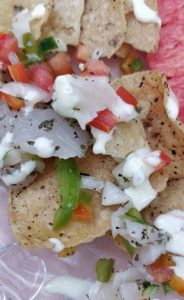 After the night dive for the advanced group, we had a dinner of chicken, rice and vegetables and as we sat down to eat one of the benches broke! Some people had to sit inside until it was fixed.

A crazy day on the island!

Frances & Victoria are volunteering through an organisation called POD Volunteer