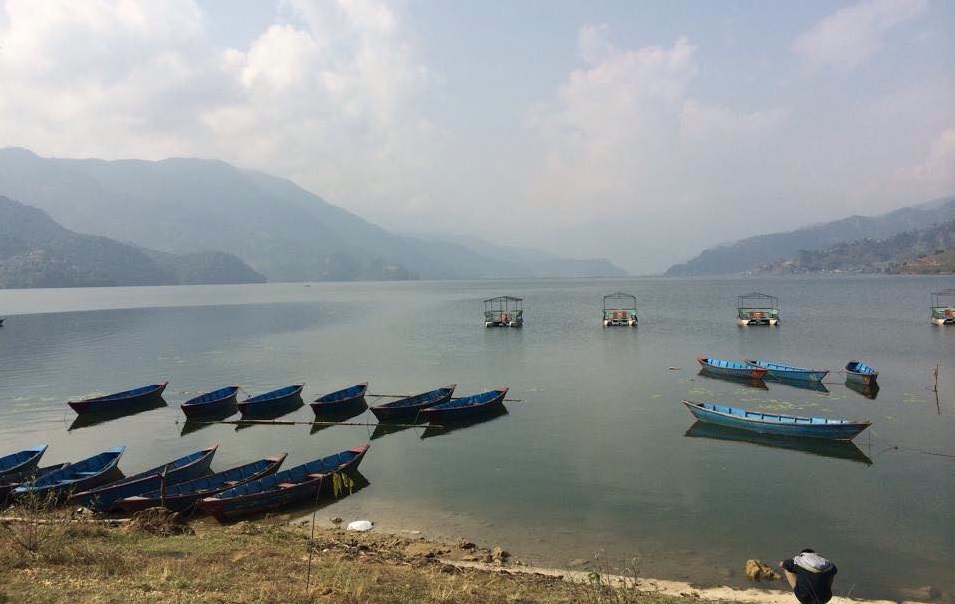 This morning we took a walk with Sarah to buy our bus tickets back to Kathmandu for next week, as sadly we leave Pokhara on Thursday morning. We are booked onto the first bus of the day, at 7am as there are no safety regulations over here and apparently this is the safest one to get. The theory is that the drivers have all had a good night’s sleep before starting the 7 hour trip.

We walked over the rocky and dusty roads, towards our placement for this morning. This is a beautiful residential compound for girls who have been rescued from trafficking, called SOS Bahnini, which means SOS sister.

On arrival, we opened the gate and were greeted by Geeta who works there and were taken to a large open air circular building in the centre of the compound and there we met some of the girls.

They were all so very friendly and asked us loads of questions. I kept turning the questions back around to them, but they proved more skilled at this than me! Happily, we connected instantly. We read stories together and they all laughed as I tried to pronounce some of the animal names!

I really loved the time we spent, playing twister and making loom band bracelets. As Nepali pop music played in the background and the sun was shining, I felt in my element.

It’s funny how effortlessly people can connect with each other and it always delights me when this happens. The girls paid us so many compliments and hung on our every word. They talked about their dreams in life and talked about the lesson they enjoyed at school. They all hoped to travel and see the world when they were older. They paint the most wonderful pictures, which PoD charities go on to sell to raise funds for the project. They are all so talented. 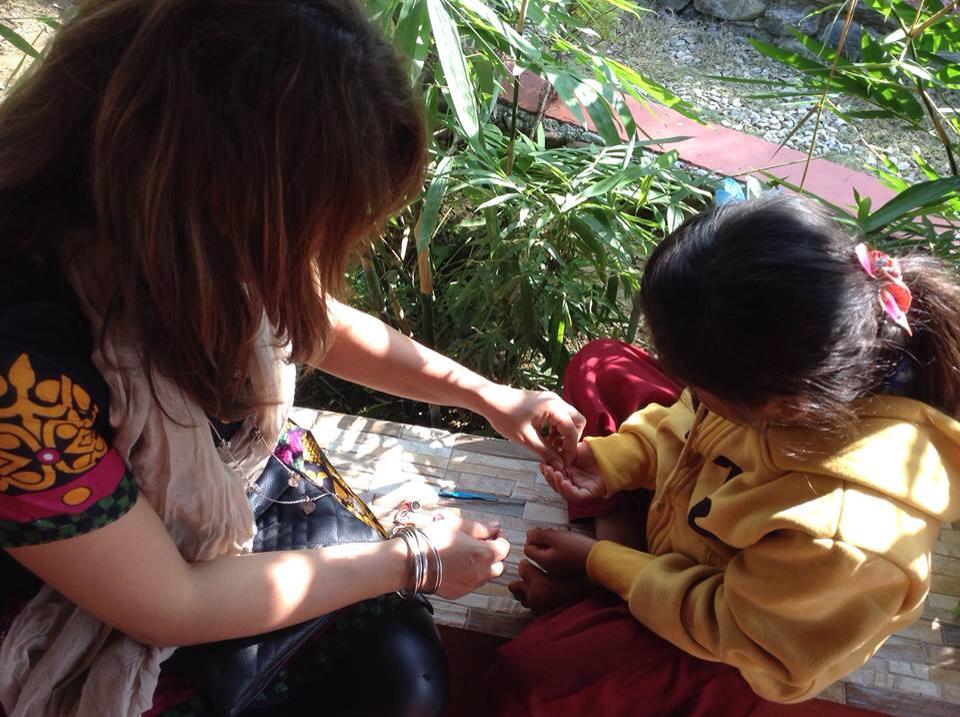 I will never forget them and was sad to leave. The girls hugged me and wished me well and I waved goodbye with a heavy heart.

This afternoon, we luxuriated in a bit of sunbathing on the balcony after a cold shower, then I decided to take a little nap. Jade and Edwina went to visit a local waterfall together and I had the top floor to myself. After going out for 2 nights in a row, I felt exhausted and needed to relax!

This evening we went for a pizza and again met up with Graham, who introduced us to his friend. A lovely Irish girl who had broken her ankle after a rafting accident. She was lovely and sweet, ignoring her ankle in her positivity. I liked her straight away.

I’m a firm believer that sport is nothing without spectators! So as the girls and Graham booked their tickets for paragliding tomorrow, I watched, just as I’ll be doing tomorrow as they soar across the sky! This is so not for me, I’m afraid…

A lovely relaxing day with an early night!

Today was reasonably chilled by our new Nepali style standards…

We had a bit of a hang out session followed by lunch and then myself and Edwina decided to go do a bit of sight-seeing so we got a taxi to Devis Falls which is a cool waterfall. We were a bit blonde when the taxi driver dropped us off saying “Now where do we go!?!?” When there was a humongous sign behind us!

The waterfall was really pretty but not as big as I had imagined! It was hard to take pictures as they didn’t really do it justice!
Whilst walking around here as a white face with blonde hair you get noticed quite a lot! But myself and Edwina were still a little bit weirded out when a massive family of Nepalese people stopped us to have a photo with us!? Haha was pretty funny…I kind of don’t mind it, you feel a bit like a celebrity!

We then went to have a look in some of the caves that are just across the road which was fun. It was a bit of a treacherous path and having taken a bit of a fall that morning before we headed out I was a bit worried about it happening again! I managed to cut my toe open a bit and have a nice attractive gash on my chin! Very embarrassing, but some of the roads are so stoney and uneven sometimes it’s unavoidable! Oh well!

The caves were quite enclosed and rather humid…but only to me, not my new Aussie chum. Edwina is used to ridiculously high temperatures back home so is always bundled up in her big coat where as I’m sunbathing and loving the weather!!

Our evening consisted of taking a quick walk to the paragliding centre to enquire about whether we could book for the following day! I wanted to do it but from the start was rather nervous! But good old Edwina managed to talk me in to and we put our deposit down with Graham who we’ve kidnapped to be part of our crew! Poor guy! Graham is tall to say the least so I think he was a bit concerned as whether it was safe for him! He’s our BFG which stands for Big Friendly Graham! 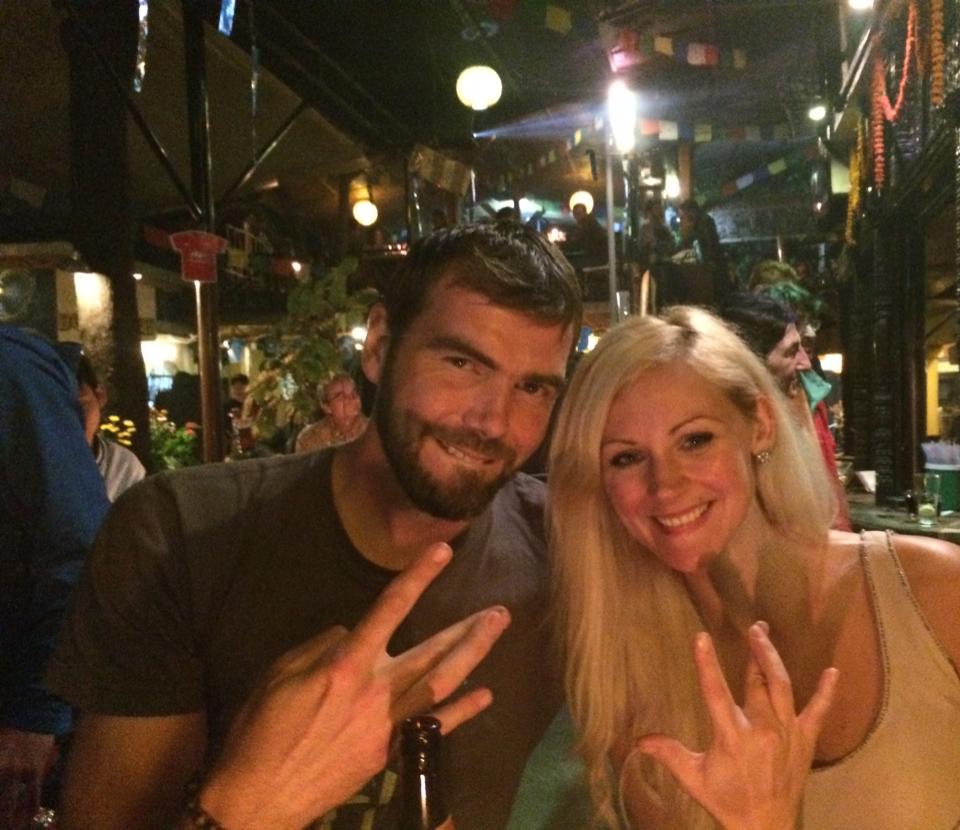 We then had dinner and headed to the Blues Bar again where once again I was welcomed up by the amazing band to do a few more songs! I can’t describe how much fun I have singing with them and Rajesh who is the lead singer joined me this time and we sang Rolling In The Deep together, improvising all the way through! I love it so much! And the band are so good and sweet, they act like rock stars on stage but then are so humble and nice!

At the end of the night Rajesh invited us ‘back stage’ aka the kitchen to eat with them, which I just thought to be such a nice gesture! I think I might be their new biggest fan and want them to come back to England with me!

Another awesome day! I don’t want to leave!!