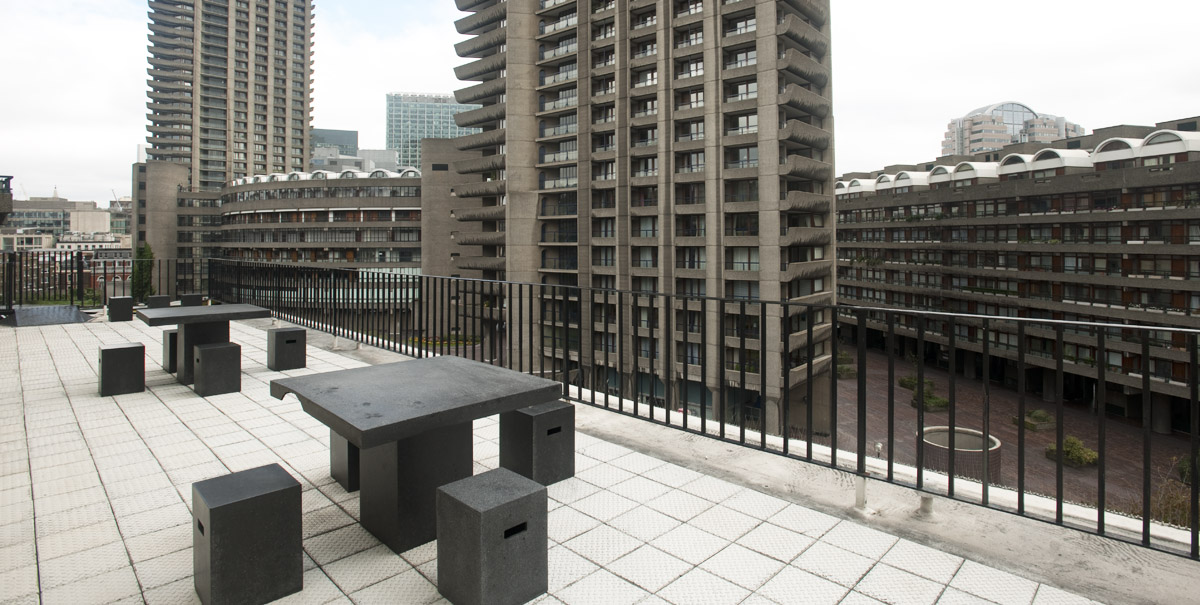 The Barbican complex is a estate in the City of London, in an area densely packed with commerce and finance.

The Minister for the Arts, Tessa Blackstone, announced in September 2001 that the Barbican complex was to be Grade II listed. It has been designated a site of special architectural interest for its scale, its cohesion and the ambition of the project. The complex is architecturally important as it is one of London’s principal examples of concrete Brutalist architecture and considered a landmark.

The residential estate consists of 13 terrace blocks, grouped around the lake and green squares within the complex. The main buildings rise for up to seven floors above a podium level, which links all the facilities in the Barbican, providing a pedestrian route above street level. Some maisonettes are built into the podium structure. There is no vehicular access within the estate, but there are some car parks at the periphery of the estate. Public car parks are located within the Barbican centre.

The Barbican is set firmly the ‘Square Mile’ of the City of London and is very well serviced by tube and rail links, with Barbican, Farringdon, Liverpool Street and Old Street station all within 5 minutes walk.

The British Museum is a museum of human history and culture in London. Its collections, which number more than seven million objects, are amongst the largest and most comprehensive in the world and originate from all continents, illustrating and documenting the story of human culture from its beginning to the present.
The British Museum was established in 1753, largely based on the collections of the physician and scientist Sir Hans Sloane. The museum first opened to the public on 15 January 1759 in Montagu House in Bloomsbury, on the site of the current museum building. Its expansion over the following two and a half centuries has resulted in the creation of several branch institutions, the first being the British Museum (Natural History) in South Kensington in 1887. Some objects in the collection, most notably the Elgin Marbles from the Parthenon, are the objects of intense controversy and calls for restitution to their countries of origin.

Tate Modern is the national gallery of international modern art. Located in London, it is one of the family of four Tate galleries which display selections from the Tate Collection. The Collection comprises the national collection of British art from the year 1500 to the present day, and of international modern art. The other three galleries are Tate Britain, also in London, Tate Liverpool, in the north-west, and Tate St Ives, in Cornwall, in the south-west. The entire Tate Collection is available online.
Created in the year 2000 from a disused power station in the heart of London, Tate Modern displays the national collection of international modern art. This is defined as art since 1900. International painting pre-1900 is found at the National Gallery, and sculpture at the Victoria & Albert Museum. Tate Modern includes modern British art where it contributes to the story of modern art, so major modern British artists may be found at both Tate Modern and Tate Britain.

With over 2,300 paintings in the Collection, there are hundreds of reasons to visit the Gallery. The National Gallery, London houses one of the greatest collections of Western European painting in the world. These pictures belong to the public and entrance to see them is free. The National Gallery Collection contains over 2,300 works, including many famous works, such as van Eyck’s Arnolfini Portrait, Velázquez’s Rokeby Venus, Turner’s Fighting Temeraire and Van Gogh’s Sunflowers. All major traditions of Western European painting are represented from the artists of late medieval and Renaissance Italy to the French Impressionists. The closest tube stations are Charring Cross, Piccadilly and Leicester Square.

The London Eye (also known as the Millennium Wheel), at a height of 135 metres (443 ft), is the largest Ferris wheel in Europe, and has become the most popular paid tourist attraction in the United Kingdom, visited by over three million people in one year. At the time it was erected, in 1999, it was the tallest Ferris wheel in the world, until it was surpassed by the Star of Nanchang (160 m) in May 2006, and then the Singapore Flyer (165 m) on 11 February 2008. However, it is still described by its operators as “the world’s tallest cantilevered observation wheel” (as the entire structure is supported by an A-frame on one side only.
The London Eye is located at the western end of Jubilee Gardens, on the South Bank of the River Thames in the London Borough of Lambeth in England, between Westminster Bridge and Hungerford Bridge. The site is adjacent to that of the former Dome of Discovery, which was built for the Festival of Britain in 1951.

Her Majesty’s Royal Palace and Fortress, more commonly known as the Tower of London (and historically as The Tower), is a historic fortress and scheduled monument in central London, England, on the north bank of the River Thames. It is located within the London Borough of Tower Hamlets and is separated from the eastern edge of the City of London by the open space known as Tower Hill. It is the oldest building used by the British government.
The tower’s primary function was a fortress, a royal palace, and a prison (particularly for high status and royal prisoners, such as the Princes in the Tower and the future Queen Elizabeth I). This last use has led to the phrase “sent to the Tower” (meaning “imprisoned”). It has also served as a place of execution and torture, an armoury, a treasury, a zoo, the Royal Mint, a public records office, an observatory, and since 1303, the home of the Crown Jewels of the United Kingdom.

Originally known as Buckingham House, the building which forms the core of today’s palace was a large townhouse built for the Duke of Buckingham in 1703 on a site which had been in private ownership for at least 150 years. It was subsequently acquired by George III in 1761 as a private residence for Queen Charlotte. During the 19th century it was enlarged forming three wings around a central courtyard.
Buckingham Palace finally became the official royal palace of the British monarch on the accession of Queen Victoria in 1837. The state rooms, used for official and state entertaining, are open to the public each year for most of August and September, as part of the Palace’s Summer Opening.

The Royal Albert Hall is an arts venue situated in the Knightsbridge area of the City of Westminster best known for holding the annual summer Proms concerts since 1941.
The Royal Albert Hall is one of the UK’s most treasured and distinctive buildings, recognisable the world over. Since its opening by Queen Victoria in 1871, the world’s leading artists from every kind of performance genre have appeared on its stage. Each year it hosts more than 350 performances including classical concerts, rock and pop, ballet and opera, tennis, award ceremonies, school and community events, charity performances and lavish banquets.

The Collegiate Church of St Peter at Westminster, which is almost always referred to popularly and informally as Westminster Abbey, is a large, mainly Gothic church, in Westminster, London, just to the west of the Palace of Westminster. It is the traditional place of coronation and burial site for English, later British and later still (and currently) monarchs of the Commonwealth Realms. It briefly held the status of a cathedral from 1546–1556, and is a Royal Peculiar.