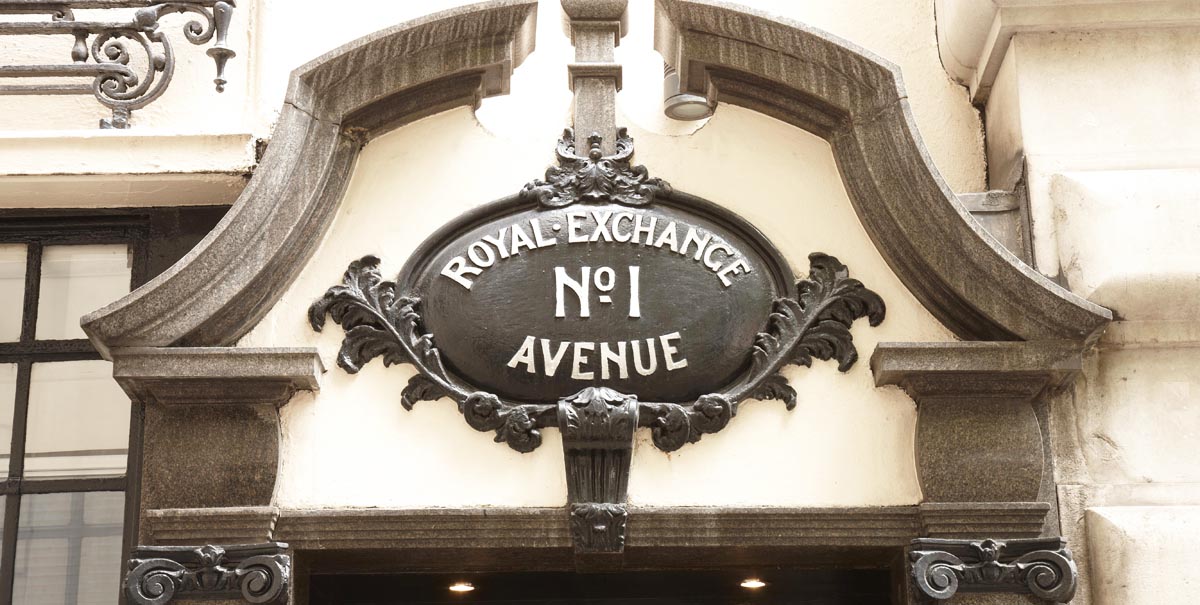 The “City of London” is the area occupied by the original walled city built by the Romans.The old city covered an area of roughly one square mile and was surrounded by an eighteen foot high wall and a ditch (or moat).

The walls disappeared many years ago but this area, that has for centuries been one of the major financial centres of the world, now full of international banks and businesses, is still referred to as “The Square Mile” or “The City”. It even has its own police force, separate from the Metropolitan Police who cover the rest of London.

This coat of arms belongs to the City of London Corporation. This body along with an annually elected Lord Mayor, administrates everything within the square mile and is totally independent of any other national or London authority. It was founded centuries ago, and apart from the Throne of England, is the oldest governing body still in existence anywhere in the land. Their motto is: Domine dirige nos – Lord direct us.

The Great Fire of 1666 destroyed almost the whole of The City of London. The tightly packed buildings with their jetties (upper floors jutting out) overhanging the lower floors, almost touching the buildings opposite across the narrow streets ensured that the flames would not be stopped before most were devoured. Within a week, Sir Christopher Wren had produced a set of plans for the complete rebuilding of the City based on a layout similar to the one he had seen on his only trip abroad, to Paris.

To settle any disputes about boundaries a panel of 22 judges was set up. These dealt only with matters arising from the rebuilding and they became known as the “Fire Judges”. Sir Christopher Wren’s office was given the task of rebuilding 51 of the 88 churches destroyed in the fire, along with St. Paul’s Cathedral, which incidentally, was totally destroyed when the wooden scaffolding, being used at the time for renovation work, caught fire.

Home to many of the world’s finest brands and luxury shopping the Royal Exchange is offers unvrivalled retail and high end restaurants.

The Museum is housed within the Bank of England, at the heart of London. It traces the history of the Bank, also known as the Old Lady, from its foundation by Royal Charter in 1694 to its role today as the nation’s central bank. Exhibits include early writing equipment, weapons once used to defend the bank against robbers, coins, photographs and archaeological finds uncovered when the Bank was rebuilt between 1925 and 1939, which, oddly enough, include four extremely rare Roman gold bars. The Bank also puts on regular exhibitions and activities for children. Admission is free.

First built in 694 but destroyed by the Great Fire in 1666, the beautiful building that stands today was designed by Christopher Wren and completed in 1710. St. Paul’s has been host to many great occasions including the funeral of Sir Winston Churchill in 1965 and the wedding of Prince Charles and Lady Diana Spencer in 1981. There are numerous treasures to see and experience in St. Paul’s – a visit is a must. However, the Whispering Gallery is worth a special mention. Just a whisper against the blank circular wall can be heard 42 meters away on the opposite side.

One of the oldest surviving medieval buildings in London, St. Ethelburga’s was founded around 1180. Though the current building on this site was completed in the early 1400s, the interior was largely reconstructed after an IRA lorry bomb exploded in 1993, damaging the inside almost beyond repair. The building still retains its medieval exterior. St. Ethelburga’s hosts more than 100 events each year, including religious workshops and lectures as well as cultural events such as world music performances, poetry readings and films. Refer to their website for a calendar of events.

The Museum of London

The museum itself stands on the site of a Roman fort. It is the largest and probably the most comprehensive urban museum on the planet, exploring all aspects of London city life from prehistoric times to the present day. The museum also periodically hosts various exhibitions on top of its permanent displays, which include the Great Fire Experience depicting the 1666 tragedy. Other galleries focus on transport, children and even the macabre.

The Monument is the tallest isolated stone column in the world. It was built by Sir Christopher Wren between 1671 and 1677 to commemorate the Great Fire of London which began on 2 September 1666. This impressive block of Portland stone rises 202 feet high into the London skyline, and is situated exactly 202 feet west of the baker’s shop on Pudding Lane where the fire started. To reach the summit of the Monument you must first tackle the 312 steps of a steep spiral staircase. Once you have reached the top you will be able to enjoy the stunning views on offer.

Be a masochist and scare yourself with a nocturnal walk around Jack the Ripper’s playground. At the end of the 19th century, a psycho who left female victims (mainly prostitutes) so mutilated that people were scared to walk the streets after dusk. Walk the very streets tainted by his victim’s blood and learn about the Ripper’s possible identities (which to this day remain a mystery), listen to anecdotes, see gruesome photos of the scenes of crime and play a little role-playing game near the end of the tour. Meet at 6.45pm at the exit of Tower Hill underground station – there is no need to book and you only pay at the end of the tour.

The London Dungeon invites you to delve into the capital’s blood-curdling history. Live actors, two hair-raising rides, shows and special effects transport you back to those black, bleak times.