5 ways of using your office space to motivate staff

5 ways of using your office space to motivate staff

Facebook, Google and Apple don’t just lead the way when it comes to tech.

Their offices are also trailblazing, aimed at motivating staff and keeping them contented.

And the best is yet to come, with all of them due to open employee-centric new futuristic offices designed with functionality in mind in the near future.

For example, Apple’s doughnut-shaped “Spaceship” building, which is due to open in California in 2016, claims to have everything a worker could need.

But not every company has £2.9 billion to spend on a new HQ. 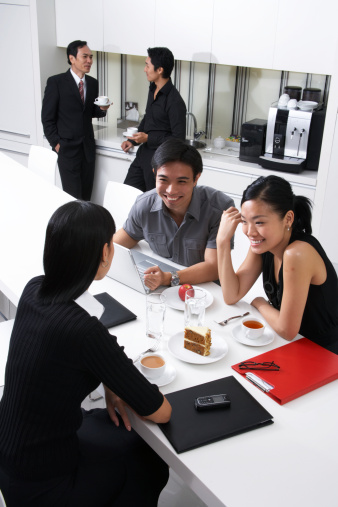 So how can budget-conscious smaller businesses create space to motivate employees? Here are six tips that could help:

An ideas army is just like any other, it marches on its stomach. Turn your kitchen into a meeting room with sofas and coffee tables. Far more informal than the boardroom, it is a perfect place for brainstorming over a cuppa and a croissant. Some of the best ideas coming out of Headlines, the Milton Keynes-based world-leading internal communications firm, have emanated from this room.

If computers for personal use are put in the break room, there is less temptation to veer away from work to see the latest goings-on on Facebook. Royal Mail swears by this. Its giant Northampton plant is laced with computer-laced rest hubs.

Sometimes getting away from their desks can make it easier for staff to think creatively. Facebook has table football and pool tables to help staff unwind. Workers say that it helps to make the atmosphere “amazing” with all employees pulling together in a spirit of openness. Such an attitude helped the social media firm top a Glassdoor poll which revealed the best companies to work for last year. Google will have pool tables at its “Boomerang” HQ in San Francisco when it opens in 2015.

Some firms, such as MBDA missile systems in Stevenage, Herts, have their own gym, citing this as one reason why staff retention is high. Facebook also offers table tennis in some offices, helping staff to stay healthy without having to rush to the nearest gym during their lunchtime. Google’s David Bennett wants the Boomerang to provide as healthy an environment as possible. Small businesses can follow suit by devoting a small room to light exercise.

Why not have a roof garden, if your budget can stretch to it? Such spaces are ideal for internal meetings in the summer and offer staff the chance to get some fresh air on their lunch breaks, even if your office is based in the middle of a crowded city. Facebook’s Silicon Valley HQ, due to open next spring for 10,000 staff, will feature extensive rooftop gardens.

Let there be light

Studies show that workers tend to be more productive if their office space lets in lots of natural light, so when choosing an office look for rooms which have large windows. As well as keeping employees happy you may find that your electricity bills drop.