Tip: try to be the first to shower in the evening, not because the water will run out if you’re the last, but because the top of the rainwater tank will have been heated by the sun and that’s the water that leaves the tank first. After that it is just cold rainwater; there’s no hot water tap in island life!

There are 10 members of staff on the island, some are permanent such as Frank, the project Director and maintenance man Luis, while others are just here for the season like Matt, a dive master working for Reef CI until the end of the summer but who is a carpenter in Maidstone back home. Then there are 16 volunteers this week, some of whom were returning for their second, third or fourth weeks, but most, like Victoria and I, are new to the island and will be staying just one or two weeks. Most of the volunteers are from the USA, with an Australian, a Dutchman and two Frenchmen, Victoria and I are the only British volunteers. From talking to the group so far, many have a love of the ocean and the environment and were already keen divers before the trip.

After arriving to the island soaked in salt water, we changed out of our wet clothes and all the new volunteers were given an orientation by Frank, the project’s director. We learnt about the different projects they run and why. 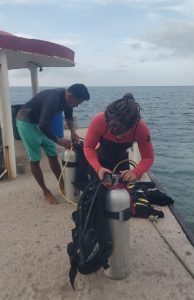 Lionfish hunting, to reduce the numbers of this invasive species, lobster population monitoring and endangered fish species monitoring. I’ll write more about each project as we come to take part in each of them. Reef CI is a non-profit NGO that reports into the Belizian Department of Fisheries. The projects they run aim to improve the condition of the Belizian Reef which is part of the Mesoamerican Barrier reef, the largest in the Northern Hemisphere.

After our orientation, returning volunteers headed out for a guided dive, whilst new volunteers headed onto the water for a dive to assess their skills. Victoria and I had a run through of the equipment from one of the diving instructors to get us started.

That evening we had some well earned dinner and all got to know each other a bit better over volleyball and card games before heading to bed.