Tip: the bell is the most important sound on the island, it means gather in the living area. Everyone loves hearing it at 8am, 1pm and 7pm, because that means food is ready! 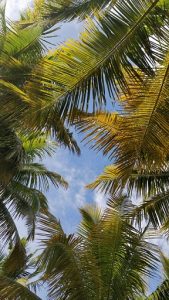 The day starts early on Tom Owens Caye, there is coffee, fruit and snacks out from 6.30 so everyone can have something small to eat before the first dive of the day. At 6.45 there is a briefing of what everyone will be doing on their first dive and the boat heads out at 7am.

Tuesday started with open water diver lessons for those taking them and a lionfish spearfishing dive for the rest of the group. Lionfish are a non-native species in the Caribbean; First seen off the coast of Florida in 1984, they have since spread across the Caribbean, being spotted as far north as the New York coast during recent summers. Lionfish are a rare sight for divers in the Pacific and Red Sea which are the lionfish’s natural habitats, whereas spotting one in the Caribbean is becoming increasingly common – an ominous sign for the state of the reef.

Lionfish have no natural predator in the Caribbean or Atlantic and are extremely adaptable, happy to live in all different conditions, hot, cold, shallow or deep water. The females can produce up to 20,000 eggs every 3 to 4 days. As unfussy eaters, they are tough competition for groupers and other native species of fish. They even eat all the tiny fish which feed on algae and stop it becoming overgrown and affecting the temperature and acidity of the sea, endangering the delicate balance of the reef. In short, they are a dangerous pest. 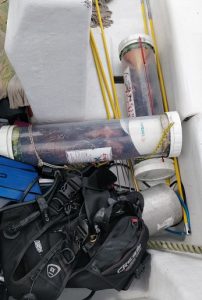 After the first dive of the day the advanced group had managed to spear 30 lionfish, so it was time to dissect them and record the findings. We took a few measurements, made a note of their sex and whether or not they were mature. Finally we looked at the stomach contents before passing it on to be filleted for a dinner later this week, the carcasses are then fed back to moray eels (the one pictured was longer than my arm!). I hear lionfish tacos are an island favourite, can’t wait to try them!

Two more dives later and just under 100 lionfish had been speared in total. One of the dive masters, Willy told us that they would be saving some of the lionfish fillets for the lobster festival later in June and making different recipes using lionfish to educate the Belizian public on how eating this delicious fish can also help the environment by controlling the population. 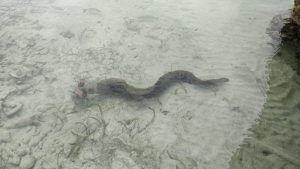