*Tip: coffee can worsen sea sickness, so if it’s particularly choppy or if you suffer with it badly avoid it altogether  just before getting on the boat. 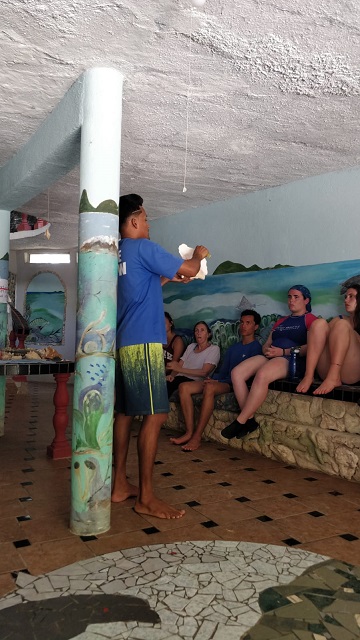 Tuesday was conch dive day, our job for one of the dives would be to find out the number of conch within a defined area. Willy, one of the marine biologists here would then write up the numbers and send them in a report to the fisheries department.

Reef CI, the charity who run the island only report on queen conch as they are commercially harvested unlike other species of conch.

They grow with their shell, so as they get older they grow bigger and the shell gets thicker. So volunteers are tasked with measuring the length of the shell and the thickness of the lip to determine a conch’s age. They can live up to 30 years old if they’re not killed by something, (usually people octopuses or turtles) and their diet consists of plankton and sea grass. 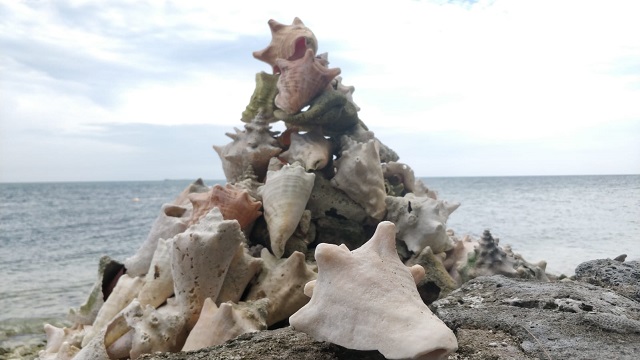 There are regulations to curb illegal fishing, but fishermen come from neighbouring Honduras and Guatemala to dive for them at night which is difficult to police. Fishermen are not allowed to scuba dive for them, only freedive, to ensure that one fisherman cannot catch too many conch in one go.

In the Sapodilla Caye marine reserve (where Tom Owens Caye is located), there are three different zones, general use zones where fishing is allowed, areas which are for recreational use only and preservation, no entry zones.

The group’s task was to see how many queen conch we could find and measure in a 30 minute dive. The numbers would then be added to Reef CI reports and sent to the fisheries department at the end of the year. Between the whole group we only found 3 indicating that fishermen may have been in the area recently.

The numbers may have been small, but hopefully by helping to report on them, the necessary changes can be made to help the population grow.

Frances & Victoria are volunteering through an organisation called  POD Volunteer