BE Offices Elephant stops for a rest in Bow Churchyard

BE Offices Elephant stops for a rest in Bow Churchyard

BE Offices has teamed up with Elephant Family, the only charity solely dedicated to ensuring the survival of the Asian elephant, to launch London’s biggest ever public art event, which will see the capital taken over by elephants.

Business Environment has sponsored an elephant called Midnight Indigo who can be seen in Bow Churchyard on Cheapside in the heart of the City from 3rd May to 23rd June. Midnight Indigo, who has been hand-painted by the artist Cornelia O’Donovan, joins a further 249 life-size elephants in central London landmark locations.

David Saul, Managing Director at Business Environment, commented: “Our sponsorship initiative is part of Business Environment Group’s strategy to develop our plans to move towards being carbon neutral and to have a less damaging impact on our environment. It also supports our clients in their efforts to improve their environmental impact. By helping to sponsor London’s Elephant Parade, we are delighted to support this wonderfully creative project that aims to raise awareness of the Asian elephant’s plight.”

Sotheby’s will auction the elephants at an event on 30 June, which aims to raise more than £1 million, benefiting more than 15 UK conservation charities working in Asia.

Working with the Wildlife Trust of India, funds raised by the Elephant Parade will be used to buy and manage vital wildlife habitat across Asia, giving Asian elephants, and the species and people that share the land, a safer and more sustainable future. Elephant Family will also invest funds in community education projects across Asia, highlighting the commercial, cultural and ecological significance of Asian elephants, to instigate a positive shift in local attitudes towards elephants.

To learn more, or to sign up to be part of the Elephant Parade.

The Elephant Parade
The elephants, destined to become highly collectible works of art, will grace London landmarks, including Buckingham Palace, Parliament Square and the South Bank turning the capital into an urban jungle. They will then be herded together in one of London’s great green spaces for a magnificent exhibition, open to the public.
After going on display to the public they will be auctioned by Sotheby’s at a glittering event, which aims to raise over £1 million, benefiting more than 15 UK conservation charities working in Asia. Attracting a veritable who’s who of London society, including the Duchess of York, Princess Michael of Kent and Joanna Lumley, this event is set to be the party of the season.

Within only 100 years the elephant population has shrunk by over 90%, dropping from 250,000 to an estimated 25,000, placing this valuable species dangerously close to extinction. If current trends continue the Asian elephant will cease to exist in the wild by 2050.

Each artist and designer has been given an individual 1.65m (L) x 1.48m (H) x 0.70m (W) elephant and asked to create something completely unique.
For detailed information on the Elephant Family and the Elephant Parade please request a fact sheet from Jayne Alexander or Lucy Moss at Dovetail Agency on tel: 020 7016 6740 or email: Jayne@dovetail-agency.co.uk or lucy@dovetail-agency.co.uk 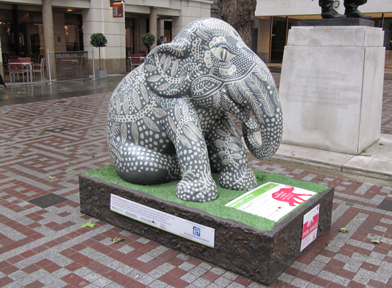