Authors of The Confidence Code, a book recently published in the USA looking at The science and art of self-assurance – what women should know, have stated that evidence suggests that as we still strive for equality in the workplace, women are less self-assured than their male counterparts and when it comes to success, confidence is as important as competence.

So while women are equally as competent as men, is our lack of confidence holding us back?

For how long have we kept our heads down, played by the rules and perhaps not asserted ourselves when we should have done? We’ve lived under the impression that if we work sufficiently hard then our natural talents will be recognized and rewarded. Not necessarily so say writers Claire Shipman, a reporter for ABC News, and Katty Kay, the anchor of BBC World News America (pictured). They have worked for 20 years covering American politics and interviewed some of the nation’s most influential women but were surprised to learn the extent to which such women suffered from self-doubt. 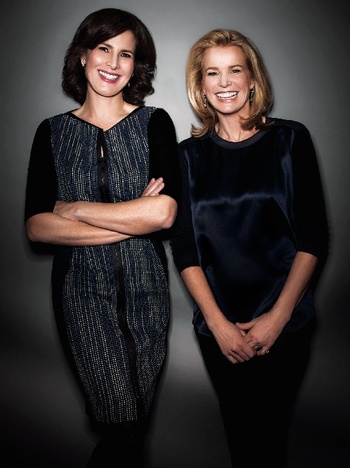 Undeniably we have made progress. Global studies undertaken by the likes of Goldman Sachs have shown that businesses employing large numbers of women outperform their competitors on every level of profitability. Surely this confirms our competence and certainly those in the know, who follow closely ever-changing values in society, see a global shift in a female direction.

Although we have worked diligently and tirelessly, men around us continue to earn more and be promoted faster. The statistics speak for themselves with women in short supply at the top of the corporate trees and our numbers increasing only fractionally over time. It’s been 50 years since women first stormed the boardroom and yet our career trajectories are still nothing like a man’s.

A 2011 UK survey by the Institute of Leadership and Management, questioned managers about their levels of professional confidence. While only a third of men surveyed admitted to a lack of confidence in their careers and job performance, half of the ladies confessed to self-doubt.

Of course there is truth in the claim that we have a change of priorities when children appear on the scene. Our maternal instincts contribute to a complex emotional wrench between our home and work lives, a pull that in the most part and at least for now, is nowhere near as testing for most men. Other observers see female success blocked by institutional and cultural barriers and there is an element of truth in this too. Claire and Katty believe that a more simplistic explanation for women’s perpetual failure to smash through the glass ceiling is essentially our critical lack of confidence.

The intangible nature of confidence has fascinated the pair ever since they began work on in 2009 their New York Times Bestseller Womenomics, which investigated the various positive changes evolving for women. To their surprise, when they talked to women, lots of women, all well qualified high achievers, Claire and Katty continually came across an unidentifiable stumbling block. They couldn’t understand why one successful investment banker mentioned that she didn’t really deserve her last promotion or why a pioneering engineer threw in to the conversation that she was unsure as to whether or not she was the best choice to head up a big new project. It eventually occurred to the seasoned journalists that the common theme was self-doubt, indeed they knew the feeling firsthand.

The ladies soon had their suspicions confirmed. The confidence gap separating the sexes is vast and it is a huge problem for women. Women in general feel less ready for promotion and evidently underestimate their abilities and the root of the problem seems to be a whole range of factors from biology to upbringing.

A body of evidence is growing that demonstrates the devastating consequences of self-doubt. It seems that success is aligned as much with confidence as it is with competence. Small surprise then that in spite of progress, women are still dramatically underrepresented in the board room.