Enterprise zones see the creation of over 15,500 jobs in the UK

Enterprise zones see the creation of over 15,500 jobs in the UK

Since the conception of Enterprise Zones in the UK, over 15,500 jobs have been created.

Communities Secretary Eric Pickles has announced that Enterprise Zones have now created in excess of 15,500 jobs across the country since opening for business and are playing a critical role in delivering greater prosperity to the British economy.

Figures released last week (23 February 2015) show that the 24 enterprise zones set up by the government have created thousands of jobs, as well as attracting more than 480 businesses and over £2.1 billion of private investment across a range of sectors including aerospace, automotive, renewable industry and pharmaceutical. 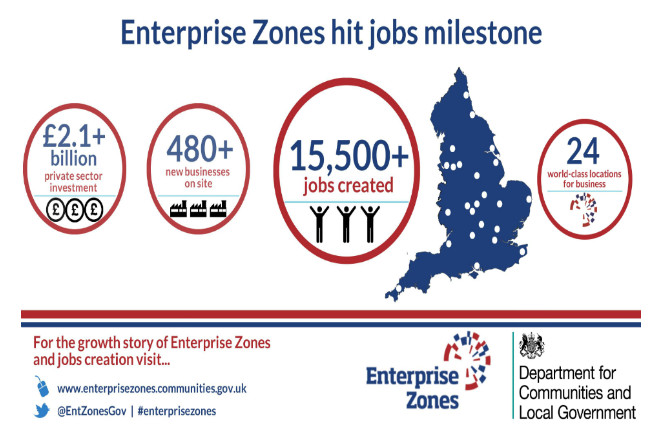 All Enterprise Zones now have activity, be it continued growth of established sites or formerly neglected sites which have been given a new lease of life through vision and funding. The resulting multiple benefits to local communities include new business opportunities and improved infrastructure. The UK’s construction sector and its wider supply chain have also received a boost.

The Communities Secretary recently visited a new £22 million cutting-edge manufacturing centre owned by Cosworth at Northampton’s Enterprise Zone. The facility has created highly skilled jobs and apprenticeships in order to fulfil £75 million worth of new contracts.

With over 130 businesses on site, the enterprise zone is developing a justified reputation as a centre of excellence for automotive and manufacturing.

The University of Northampton also plans to relocate to the business park in a £330 million move which will create a purpose-built, modern campus for 14,000+ students.

Communities Secretary Eric Pickles said: “Enterprise zones are now picking up the pace and really starting to deliver for the economy. We’re seeing activity across the country from established sites attracting some of the biggest names in business to derelict sites being brought back to life. That’s because our long-term economic plan is giving businesses the confidence to invest.

“They know that enterprise zones work and are making the most of the top-class incentives and world-class infrastructure on offer. And that’s great news for local economies and communities because it’s these kinds of businesses that have the vision to grow, creating thousands more jobs for hard-working people.”