Focus on managers… What sort of boss would Claire Underwood make?

Focus on managers… What sort of boss would Claire Underwood make?

As part of our regular spotlight on managers, we take a look at what it would be like if we got a job where House of Cards’ Claire Underwood was our boss… Just beware of spoilers!

House of Cards is back for its sixth and final series… only this time Robin Wright’s Claire Underwood is taking centre stage. Not only is Claire leading the country, she’s now the star of the show.

Many might argue that Claire has been running the show for a while anyway. A modern Lady Macbeth, ice-cool Claire has long been the most compelling character in House of Cards, scheming ruthlessly – and stylishly – to propel herself and her husband into power. You definitely wouldn’t want her as an enemy… but what would Claire Underwood be like as a manager?

Who is she?
She’s only the (fictional) President of the United States, that’s who! Hailing from a wealthy family in Texas, she met husband Frank at college before becoming his partner in crime as he moved up the political ranks in Washington.

Claire is highly intelligent, strong and shrewd. She also craves power and she’ll stop at nothing to get it. And when it came to their relationship Claire was always very much in charge. Now she’s in charge of one of the most powerful countries in the world. 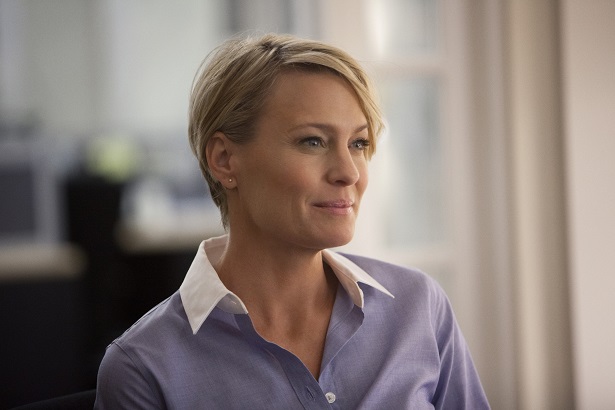 Notable achievements?
Claire was a political lobbyist and the CEO of the ‘Clean Water Initiative’, an environmental non-profit organisation that brought water supplies to impoverished, developing countries.

As her husband’s star rises, Claire also ascends the political ranks. When Frank Underwood is made Vice President, Claire becomes the Second Lady of the United States. During her tenure as Second Lady, Claire – herself a victim of sexual assault – works on a bill to prevent sexual assault in the military.

When Frank becomes President – thanks in no small part to his wife’s scheming – First Lady Claire heads up a bill for stricter gun control, but she longs for a more significant role. After an unsuccessful stint as US ambassador to the UN, Claire regroups and eventually gets elected as Vice President alongside husband Frank. When Frank resigns from the presidency after a scandal, Claire takes the reins and replaces him in the Oval Office.

Best managerial traits
Calm under pressure: Claire doesn’t panic when things go wrong. In fact, we very rarely see her as anything other than exceptionally composed. She doesn’t react emotionally when put under pressure; she’s unfailingly rational. When faced with an alarming situation, Claire doesn’t get swept away by her fears, she stands back and carefully crafts her response. Rather than lose her cool, Claire knows that a leader must lead by example and remain calm. And she knows that timing is everything.

Exceptional social skills: Claire might not be your average social bunny but she knows how to successfully manage a room. Soft-spoken, charming and elegant, she is very aware that it’s much more useful for her to be well-liked. She knows it gives her an advantage. That’s perhaps why she champions causes such as clean water for developing countries. She is actively managing people’s  perception of her. Claire is able to control her emotions, in a remarkably Machiavellian way, and rationally use them to her advantage to manipulate and control a situation.

Driven: Amazingly Claire surpasses even her husband in her predilection for gaining power at all costs. She is pure ambition: she knows what she wants and she goes for it. She is formidably confident in herself and she never backs down. Although her intentions are not exactly pure she also is driven to help her allies to succeed – albeit with the ultimate goal of increasing her own power and influence.

Potential pitfalls
Ruthless: Although being driven can be a good characteristic, in Claire’s case it’s accompanied by a complete lack of empathy. Claire will stop at nothing to get what she wants and she doesn’t care who she screws over along the way. She’s definitely a manager you’d want to stay on the right side of. She even threatens the unborn baby of a former employee who dares to come up against her. But even if you maintain a good relationship with her that doesn’t mean you’ll be spared. Claire will dispose of you at the drop of a hat if it suits her needs.

Not a team player: You couldn’t – and definitely shouldn’t – trust Claire Underwood as far as you could throw her. As manipulative as Machiavelli himself, Claire is forever scheming behind people’s backs to get what she wants. Her external charm only makes her even more dangerous. Everything she does is meticulously calculated, and it’s all for her own personal gain.

Overall rating as a manager
We’re guessing it would depend who you ask. Claire embodies some characteristics of a great leader, and as long as you’re useful to her you may well think she’s charm personified. Get on her wrong side though and you’ll definitely regret having her as a manager.

In the grand scheme of things, it’s probably a lot safer not to work for her…