Manchester has shaped the way the world does business ever since becoming the birthplace of the Industrial Revolution.

Today, the city contributes £62.8 billion a year to the economy, the second largest share in the UK, and continues to lead innovations in enterprise.

From ancient to modern
Manchester started life as the humble home to the Brigantes, a major Celtic tribe. The early Mancunians built their stronghold on the site of the modern-day cathedral. 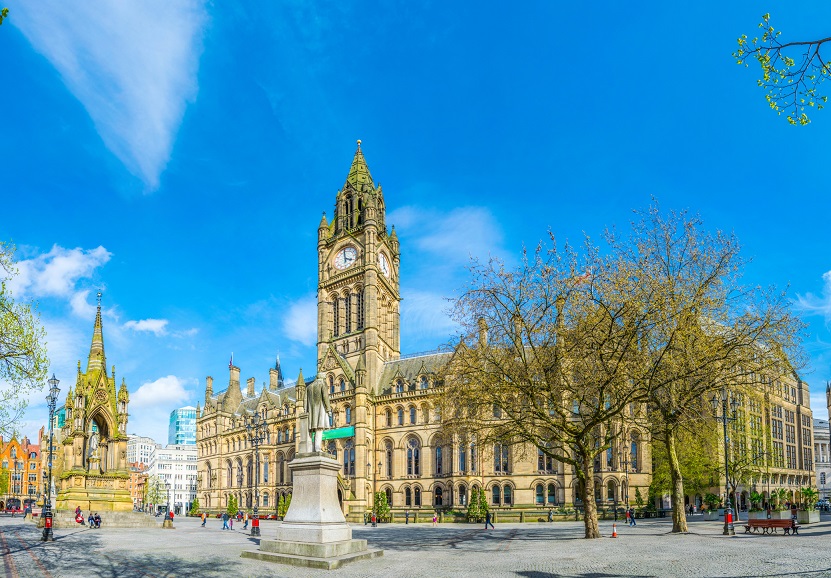 Following an influx of Flemish weavers in the 14th century, the region became a textile hot-spot. And after the creation of Britain’s first wholly artificial waterway, the Bridgewater Canal in 1761, the city was set on its path to becoming “Cottonopolis”.

The Victorian metropolis at the heart of the cotton trade was well-known for its warehouses and steam-driven textile mills that can still be seen today. Its hives of activity gave rise to the image of busy worker bees used to represent the staff inside.

The bee symbol has featured on Manchester’s coat of arms ever since 1842.

Business today
Manchester is a city of business firsts, from the first purpose-built industrial estate created at Trafford Park in 1896, to MediaCityUK, the world’s first sustainable community and purpose-built digital and media hub.

The development has set the tone for a city with big ambitions in modern industries. The city hosts over 10,000 creative, digital and tech companies, with more than 4,000 of these being start-ups.

It also employs over 220,000 people in finance, professional and business services, the highest number in the UK outside of London – a sector that contributes £16 billion to the economy from Manchester alone.

Big names
The greatest testament to Manchester’s business credentials has to be the big names found in the city. The BBC’s move to MediaCityUK in Salford Quays is one of the best-known examples of a corporation moving from London to the hub of the Northern Powerhouse.

Foreign companies too have been lured by the talent pool, infrastructure and excitement of the city. Google, Kellogg’s and Siemens are some of the 2,000 businesses from overseas with ties to the region.

Well connected
Greater Manchester is easily accessible through a range of transport options. In addition to local train and bus services, the Metrolink has 99 stops connecting the suburbs to important business districts.

Food and drink
Manchester is a dream foodie destination for even the most jaded of palettes. The Corn Exchange is the Edwardian home to a mouth-watering array of restaurants in one convenient, beautiful setting, all set to be reopening soon with the necessary social distancing restrictions. Big names, including Hawksmoor and Dishoom, have made the city their first choice for expansion in the North, and vegan and halal restaurants are also widely available.

Those looking to quaff coffee won’t be short on independent cafés. Grindsmith roast beans to suit customers’ tastes from a pod in Greengate Square or their shop in Deansgate. TAKK serves artisan coffee and Mediterranean sandwiches from a minimalist shop on Tariff Street. And for something completely different, The Tea Room at the Midland is the city’s only dedicated afternoon tea venue set in a Grade II listed building.

Social and entertainment
Manchester offers plenty of extracurricular activities to broaden your horizons or unwind away from the office. The Manchester Art Gallery is home to internationally renowned works of fine art, while the Chuck Gallery focuses on showcasing contemporary African art.

Those looking for an educational experience will find their curiosity satisfied at the Imperial War Museum North or the Manchester Museum, with its collection of natural artefacts including a fossilised T-Rex.

The city is home to two of Europe’s finest football teams. Manchester United play at Old Trafford and Manchester City have their home at the Etihad Stadium in the east of the city. Alternatively, Lancashire Cricket Club play their home games at the Old Trafford Cricket Ground.

Contact us to learn more about how your business can establish itself in the centre of bustling Manchester with flexible workspace in a prime location just yards from Albert Square and the towering town hall. Here, tenants enjoy a range of office space solutions in the heart of the bustling city centre, with high-speed Wi-Fi throughout.