Focus on Reading: A journey through the centuries

Focus on Reading: A journey through the centuries

Located in the heart of the Thames Valley, Reading has a rich industrial history and an exciting future ahead of it. Here, we take a look at 12 of the most important events in its history.

1121 – Reading Abbey founded
Founded by Henry I, the once majestic Reading Abbey was one of the most important religious sites in Medieval England before being ruined in 1538 during Henry VIII’s Dissolution of the Monasteries. The Abbey ruins have recently undergone a £3 million restoration project, re-opening to the public in summer 2018.

1643 – Siege of Reading
In November 1642, at the height of the English Civil War, a Royalist garrison of around 2,000 foot-soldiers and a cavalry regiment was established in Reading. The local townspeople suffered until Parliamentarian forces laid siege to the town in spring 1643, eventually causing the Royalists to surrender. 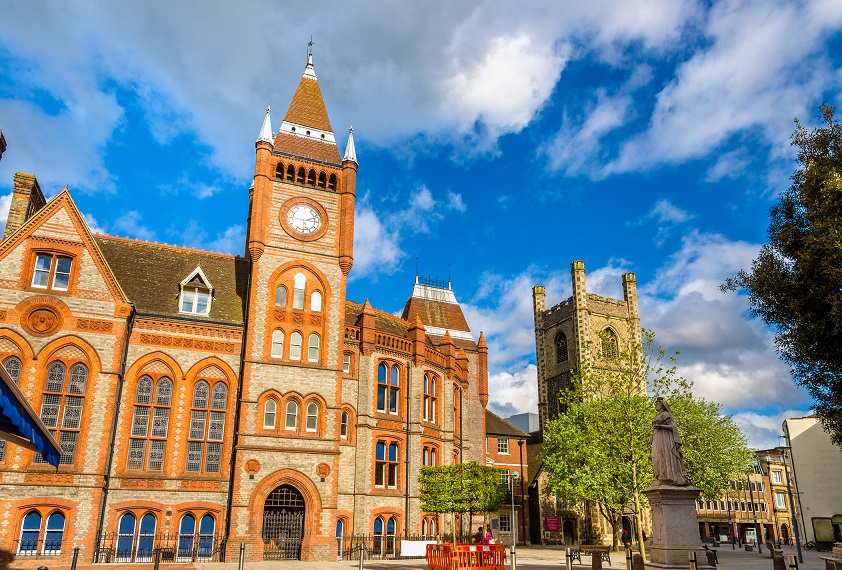 1810 – Kennet & Avon Canal completed
When it finally opened in 1810, the Kennet & Avon Canal made it possible to travel by barge from Reading to Bristol and the Bristol Channel beyond. This opened up trade in the town to the new world of opportunities provided by the 87-mile waterway stretching across southern England.

1822 – Huntley & Palmers founded
Joseph Huntley opened a small biscuit bakery at 119 London Street in 1822, before his son Thomas took over the business with George Palmer in 1841. By 1900 it was the world’s largest biscuit firm and, as well as employing over 5,000 people, Huntley & Palmers became a symbol of Reading, lovingly nicknamed “biscuit town”.

1840 – Great Western Railway arrives
On March 30, Reading Station opened as the temporary western terminus to the Great Western Railway, with the original station building — now a popular local pub — designed by GWR engineer Isambard Kingdom Brunel himself. A year later, the line west of Reading opened, connecting the town with Bath and Bristol by rail.

1871 – Reading Football Club founded
Formed on Christmas Day, Reading FC used to play their home matches in the atmospheric Elm Park near the town centre before moving to the all-seater Madejski Stadium on Reading’s southern outskirts. Once called the Biscuitmen due to the town’s association with Huntley & Palmers, the team is now known as the Royals.

1895 – Oscar Wilde jailed at Reading Prison
In 1895, well-known Irish playwright Oscar Wilde was charged for gross indecency due to his sexual relationships with men and sentenced to two years in prison. Upon his release from Reading Gaol, Wilde penned his famous poem, The Ballad of Reading Gaol, based on his experienced behind bars.

1926 – University of Reading chartered
Originally set up in 1892 as University College Reading as an extension college of the nearby University of Oxford, the University received the power to grant its own degrees in 1926 when given a Royal Charter from King George V. The university is now home to around 20,000 students, mostly based at its Whiteknights parkland campus.

1971 – First Reading Festival held
Originally a favourite with blues and prog rock fans, Reading Festival has grown over the decades to become one of Europe’s biggest music festivals. Reading has played host to some of the world’s biggest bands, including The Rolling Stones, Oasis and the Arctic Monkeys, and welcomes around 90,000 revellers every year.

1999 – The Oracle opens
Developed on the town-centre site of a 17th century workhouse of the same name, The Oracle is a large shopping and entertainment complex located on the banks of the River Kennet. The Oracle has proved popular with locals, create thousands of jobs and making Reading one of England’s best retail destinations.

2020 – Crossrail comes to Reading
In 2014, it was announced that the much-anticipated new London underground line known as Crossrail would use Reading as its western terminus. While the exact opening date of Crossrail — which will be called the Elizabeth Line on completion — remains to be seen, it will certainly change life in Reading.