Hair-up, deep voice, and a full face of makeup: the uniform that makes the capital’s businesswoman tick

Hair-up, deep voice, and a full face of makeup: the uniform that makes the capital’s businesswoman tick

She may have been one of the least popular leaders of all time, but Margaret Thatcher’s legacy lives on in offices up and down the country. Modern women, it would seem, are emulating some of the Iron Lady’s most well known traits when it comes to business.

A poll, conducted by serviced office provider Business Environment, ahead of the release of The Iron Lady, has shown that almost half of women in the UK (45.8%) have lowered the tone of their voice in a bid to get ahead in business, as Margaret Thatcher famously did.

Despite believing that they make better managers than their male counterparts, women are knowingly taking on some of their masculine characteristics in a bid to ensure their views are taken seriously in the boardroom. 56.7% of those questioned admitted they have dressed ‘more powerfully’, wearing longer hemlines (22.5%) and displaying less cleavage (22.9%) to progress in their careers.

Indeed, inappropriate dress was cited by almost three quarters of those questioned (71.70%), as the most common reason for women to pass judgement on colleagues and clients.

But that’s not all. In spite of their penchant for power dressing, modern businesswomen are not giving up their feminine wiles altogether. More than two thirds of those surveyed (64.3%) confessed to wearing more-make up to the office, perhaps an indication that whilst they value the ‘power effect’ of adopting more masculine characteristics, they realise the female touch can bring about success in other ways.

The findings of the survey may well come as a surprise to modern businesswomen, who cited Margaret Thatcher as the leader they respected least for her management style, as David Saul, Managing Director at Business Environment commented:

“Although she’s widely known for ruling with an iron fist, Margaret Thatcher actually revolutionised the way Britain does business.  She paved the way for the likes of Richard Branson and all the other entrepreneurs out there to think big and live their dreams. So as the first major female leader of our times, it’s not completely unexpected that today’s women should want to emulate her in various ways – intentionally or not.”

“Whilst it is still widely reported that women still have some way to go in terms of boardroom equality, evidence suggests they are well on their way to the dizzy heights of ‘Thatcherdom’ once again.” 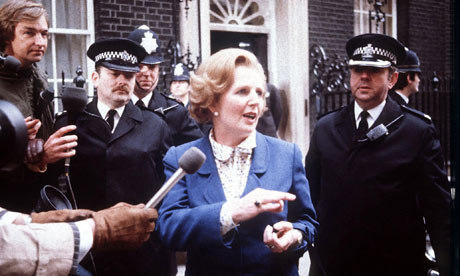 Margaret Thatcher outside 10 Downing Street in 1979.

The survey was run by ONEPOLL on a sample of 2,000 UK business respondents – 1,000 of these were women. Go to www.onepoll.com for more details.