Students and the environment benefit from BE Charity Days

Students and the environment benefit from BE Charity Days

Two BE Offices employees were in action on volunteering missions this week, one at a secondary school careers fair, the other at the Greenwich Meantime Plant Nursery.

Taking advantage of BE Offices’ “Charity Days” scheme, our PR & Marketing Officer Julie Tucker spent a day at the Jewish Community Secondary School in Barnet, while a member of the centre support team from our Paddington business centre, Stela Lyutskanova, volunteered at a project which is part of the Wildlife Heritage of Greenwich Peninsula.

Julie joined representatives from various other industry sectors such as accountancy, law, medicine, the armed forces, media, journalism, property and more, to give advice to year 9 students who are in the midst of choosing their GCSE’s, along with Year 12 students who are thinking about their future careers and the required university degrees. Representing the field of PR and marketing primarily, Julie was also able to speak to students about careers in the charity sector, having had much experience in this field. 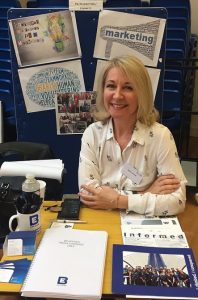 “The highlight of my day was speaking to two students about a charity event they wanted to organise as part of their A Level course. They had a venue, a date and a nominated charity, but absolutely no idea what sort of event to put on. I recommended a supper quiz, and having organised several supper quizzes in the past was able to advise them on how to cater the event, how to find a quiz master, how the event needed to be set up and staffed, along with tips on how to source raffle prizes from local businesses.

“When I told them that previous such events I’d been involved with had raised between £2 and £3,000, they were delighted.

“It was great to be part of a day where I was able to give advice and perhaps offer inspiration to youngsters who are making decisions that will set a path for the rest of their lives.” 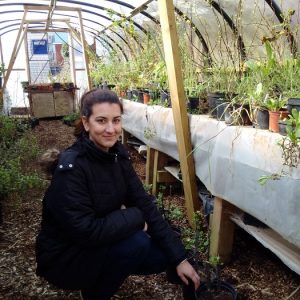 Meanwhile, on the other side of London, Stela spent a day at the Greenwich Meantime Plant Nursery.

Part of the Greenwich Peninsula Ecology Park, the Meantime Nursery is a conservation area and plant nursery opened in 2011 and run by The Conservation Volunteers.

Built to utilise the unused land in the area and turn it into something more than the scrub-land that existed there, the nursery specialises in raising native plant species and seeds ranging from water plants to meadow plants. One of the aims is to engage the local community and other groups, including young unemployed people and those with disabilities, to take part in its work learning about conservation and gaining planting skills. Various conservation and environmentally friendly projects include making bug hotels, living walls, living roods, willow and dry stone walls.

All BE personnel are given three days per year paid leave to work for a charity of their choice.