Business Environment one of UK’s best Employers for fifth Year

Business Environment one of UK’s best Employers for fifth Year

Business Environment has been named one of the country’s ‘100 Best Small Companies to Work For’ by the Sunday Times for the fifth consecutive year, one of only 9 companies to hit the milestone.

In a year with a record 828 entries to the awards, the company was the only serviced office operator to appear in the rankings, scooping 48th place.

The list of top employers is compiled via a rigorous survey, which measures job satisfaction among participating companies’ employees across eight key measures, including leadership, personal growth, and pay and benefits. 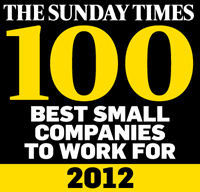 Other perks offered include free gym membership, support to stop smoking, a family fun day and time off to support a favorite charity.

“We’re very proud to be named one of the best 100 small companies to work for in the UK for the fifth consecutive year,” said David Saul, managing director, Business Environment.

“We know that our success as a company is hugely dependent on our ability to recruit and retain the best people, and are delighted that our efforts to create a company culture that reflects this has been consistently recognised by our employees.”

Business Environment is no stranger to receiving business awards. In addition to featuring in The Sunday Times’ ranking in each of the previous four years, it has also won the Business Centre Association’s Best Business Centre of the Year Award five times over the last six years, and is the current title holder.

Want to join one of the Best Companies To Work For: https://www.beoffices.com/our-careers