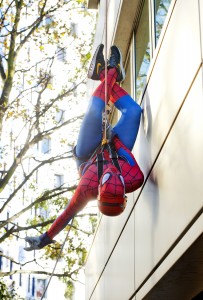 On Saturday 29th March up to 80 people will abseil down Business Environment’s Wembley office at No 1 Olympic Way.

The majority will be thrill-seeking supporters of the charity, looking to raise money for this worthy cause, and for a registration fee of £25 and a minimum sponsorship of £150 anyone can join the adrenaline junkies in their 170ft descent from our iconic 12 storey building.

As co-sponsors of this event, Business Environment are offering ten lucky daredevils the opportunity to abseil for free!

Send us a photo of yourself in your wackiest, most outlandish, most heroic superhero costume and we will select the best ten to join us on the 29th March for an experience of a lifetime!

The idea was inspired by a wish recently granted by Rays of Sunshine for six year old leukaemia sufferer Adjani Mamboleo from Leeds. His wish was to see his favourite superhero (Spiderman) shoot a web from a building which happened to be No 1 Olympic Way, headquarters of Rays of Sunshine, a charity co-founded by Business Environment’s Managing Director David Saul.

Rays of Sunshine Children’s Charity was formed in 2003 to help children who are living with serious or life-limiting illnesses between the ages of 3-18, across the United Kingdom 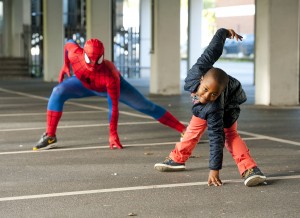 Tweet or email us your photos by Monday 24th March, winners will be announced on Tuesday 25th March.

All entrants must be over the age of 18 years and be able to get themselves to Wembley on Saturday 29th March.