Today was our first day working with the rest of the wild animals and it was completely different to our experience of working with elephants. I felt a little lost as it was all change, but we were all learning bit by bit. Lots of the volunteers we had got to work alongside and got along well with left yesterday and we were sad to see them go but with their departure came the arrival of a new group of volunteers who arrived today and who we will start working with tomorrow. After work today we went to the 7/11 to buy some snacks we’ve been missing from home we also visited the temple and took a few photos around the village.

Today was our second day on wildlife, and as much fun as it is, it’s a very different experience to working with elephants. You feel more detached from all of the animals here, whereas you get up close and personal with the elephants. Today I was with a group called Primates 2. It was our team’s job to ensure that all of the gibbons were fed and watered throughout the day.

I spent most of the day in the small forest the centre has here. There are a few boars that roam free, as well as deer. I’m surprised evolution let some of these creatures through. You’ve never seen stupidity until you’ve seen a boar scare it’s self with its own oink, it couldn’t even talk the talk. 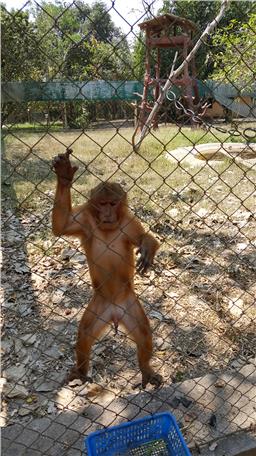 All of the gibbons in the forest are kept in cages, which on the surface looks distressing. They pace back and forth and show signs of trauma, but when you consider some of the conditions they have been rescued from, then you start to have faith in the rehabilitation process. There is a gibbon here called Satan, he is my favourite so far. I couldn’t describe him without crossing over into foul language. He waves his penis at all the ladies who walk by, he throws his food out of the enclosure just so you have to give it back to him, and he’ll pour his water over the floor whilst giving you eye contact as if he were saying “you’d better sort this mess out son.” What a lad! There were some less than great bits of my day though, mostly sweeping the forest. Who sweeps a bloody forest? We are expected to clear the leaves from the forest floor. If you don’t want leaves in a forest, then don’t have a forest!

The highlight of my day is being on Maggie duty. The centre has an orphaned orangutan in its quarantined section that requires 24hr monitoring. It’s split into two twelve hour shifts and I was out on the evening shift. So after a busy day dealing with troublesome gibbons, I had to spend the entire night keeping an eye on a baby orangutan. Good news, Maggie loves old school garage and grime music. She came down and starting swinging a stick around whilst I played some Praga Khan and Stromzy. Get this ape to Dalston Rave, she can cut some shapes. 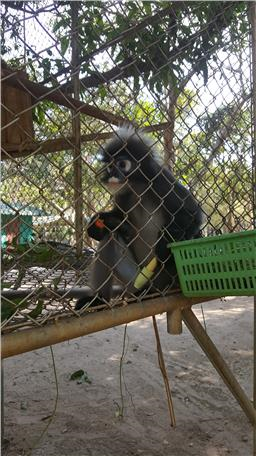 This week I have been looking after primates and bears which has made quite a change from the elephants. James has got on very well with everyone here and always has the whole group in stitches. Yesterday was a special day , we had lasagne and chips for dinner and it was nice to have some comfort food that we recognise from home. Yesterday was really busy and a little stressful, but everything we do here is for the benefit of the animals which is very rewarding. Recently I have been thinking about the fact that we haven’t got long left here and I’ll be sad to leave such an incredible place, as this has been one of the best experiences of my life.

Today was a quiet day. My team was working with the centre’s nocturnal wildlife. We worked closely with the Civets and Slow Lorises, which was thrilling and exciting, watching oversized cats and chinchillas sleep all day. We changed their food and water, swept their enclosures, and made sure they hadn’t died. I’d like to say there was a more professional way of doing this without poking them with a stick, but we poked them with a stick.
In the afternoon we had to get some saplings ready to be planted, hold back the jealousy. We put them in a small bin bag full of elephant waste and then left them in the sun to dry.

Our special task of the day was to pick up “long brown fruit.” Which meant mentally flipping a coin as to whether we were picking up poo or fruit as aesthetically there was absolutely no difference. Thankfully my team were on top form and I didn’t take the gamble too many times.

The work ethic here in Thailand is bizarre. I’d like to think back home that once you’ve started a job, you don’t stop until it is done, but here, you are set by the clock for everything. Even if you barely get anything done, you stop at the allotted time to break. Whilst collecting the fruits, we were meant to have two full buckets of them by 14.30, but only had one, but we still stopped for an hour’s rest to drink water and sit despite there being loads of fruit left to collect. I don’t think I’ll get to terms with that, but I won’t have to as I’ll be home in just a couple of days!! 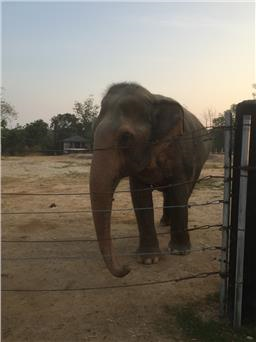 So today is mine and Diego’s last day here, and it was most definitely the weirdest day ever. I’ve never known such a laid back approach to organising work in my life, and I’ve worked jobs in Croydon.
The biggest task of the day was to clean out a store room in the centres quarantine section. They had accumulated hundreds of bottles of saline solution, ranging in expiry date from 2006 to 2014. As we dragged the mouldy boxes from the shelves, we were attacked by a hoard of rats. I tried to get them with a stick, but was told off as we are essentially on temple grounds and that I shouldn’t be trying to harm the rats. My argument of “I’m sure I’ve done a lot worse in my life to anger the gods of this temple” also didn’t fly. I guess it’s one rule for the rats, and one rule for people. Thankfully this task came to an end rather quickly for me as someone with whom I’d become friends here was bitten by a rat (I had to hold back any comments about how it wouldn’t have happened if I’d have just caught the buggers with the pointy end of my stick) and she had to be taken to hospital. I was privileged enough to be the person chosen to escort her to hospital.

Thai hospitals are strange! Our taxi parked up outside a moderately well  kept looking building and then our driver pointed to the high rise shanty town next door. There was a child on a stretcher outside with 2 police officers giving him stitches in his foot. Inside was, to its credit, immaculate, no doubt because all the minor surgeries were performed on the drive ways. We were taken to the “Trauma Zone” which consisted of a stretcher and dirty blankets, the name was apt. My friend only needed a few rabies jabs before we could be on our way. The nurse kept looking at us and laughing, I guess a Canadian with a gammy toe bite and British escort aren’t common place. We were in and out within an hour, made me wonder where the hospitals back home are going wrong.

We were back at the centre just in time to ring in the start of the last bar night in Thailand. When I arrived, Diego seemed fired up and ready for a good night, guess he had prepped himself before hand! It was a great night! We both feel like we have given a lot to the centre and to the other volunteers, so knowing that this was our last night was hard. We had worked hard, made friends, and given it all our best. We are very grateful to everyone we encountered on our experience, and especially grateful to Business Environment for sending us.