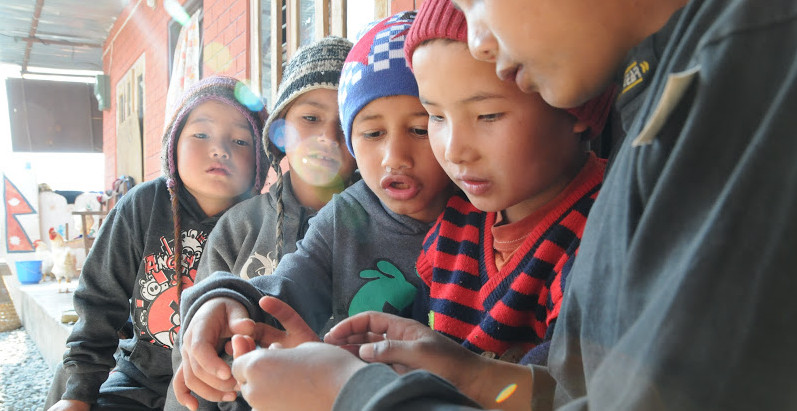 After some delays, arriving at Kathmandu airport was a relief! The hustle and chaos quickly took over the senses and any tiredness from our long journey was forgotten. Outside, the awaiting taxi driver filled his tiny boot up with my case and then put Jade’s case on the roof. We crashed into the airport trolley, then with a swift reverse we were on our way! 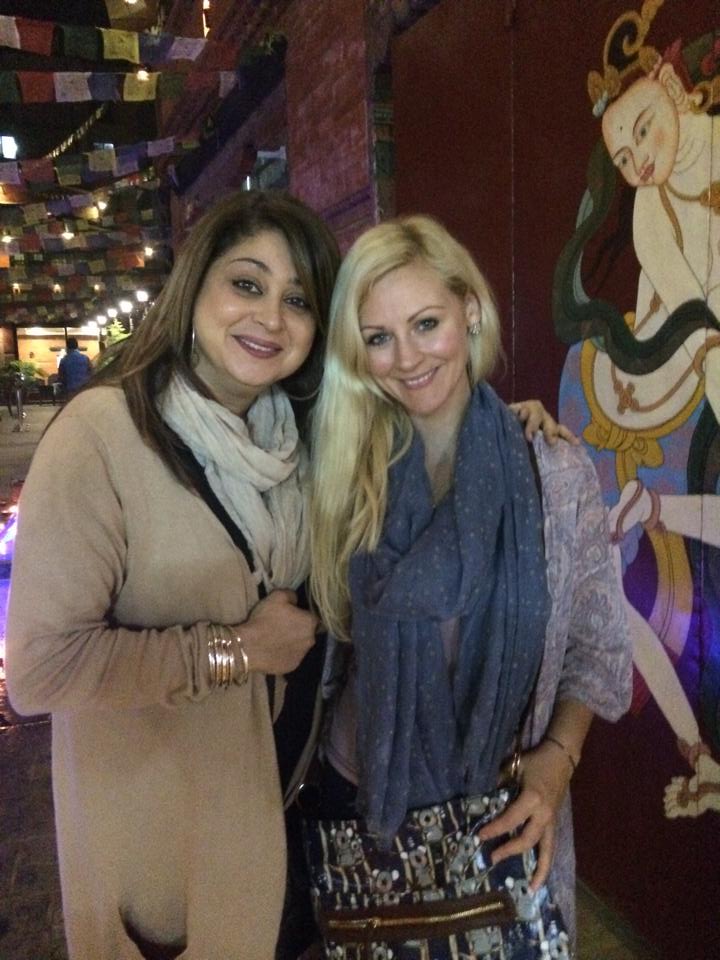 The tourist hotel had so many stairs! I always say that people should never pack more than they can safely manage, but failed myself with a 28k case. At this stage I need to clarify that it’s not full of make up! (but gifts for the orphans we will be looking after).

Without any warning and with a lovely smile the tiny hotel worker quickly carried my enormous case on his back up 4 flights of stairs. To say I was moved is an understatement. I was more scared he’d put his back out! 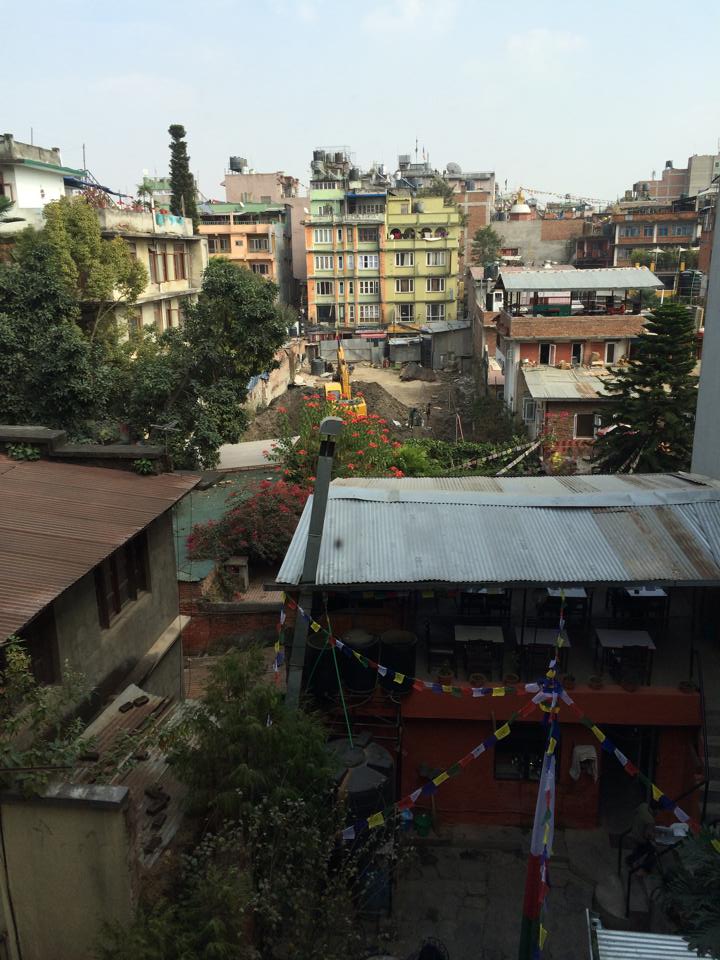 The view from our stop over room before heading to Pokhara tomorrow!

Warily, I admitted to Jade that I needed to eat after a sleep, which meant going back out into the car horns and craziness! She agreed and we set off to change our money and eat.

Early start tomorrow, the bus to Pokhara leaves at 7.00am!

Hey everyone and greetings from Kathmandu!!

Well after a somewhat long and exhausting flight with an unexpected three and a half hour stop over in Turkey myself and Yasmine finally arrived safely in Nepal.

After a mini panic that our suitcases had decided not to join us for our adventure they finally showed up and we were off and greeted by our taxi driver.

I have to say that I own a mini…and the car we were about to try to squeeze 4 people as well as two humongous suitcases into was less then mini!! Unfortunately my case drew the short straw and ended up on top of the car…no safety belt or strap…I think it stayed on by me sitting in the car willing it to!! 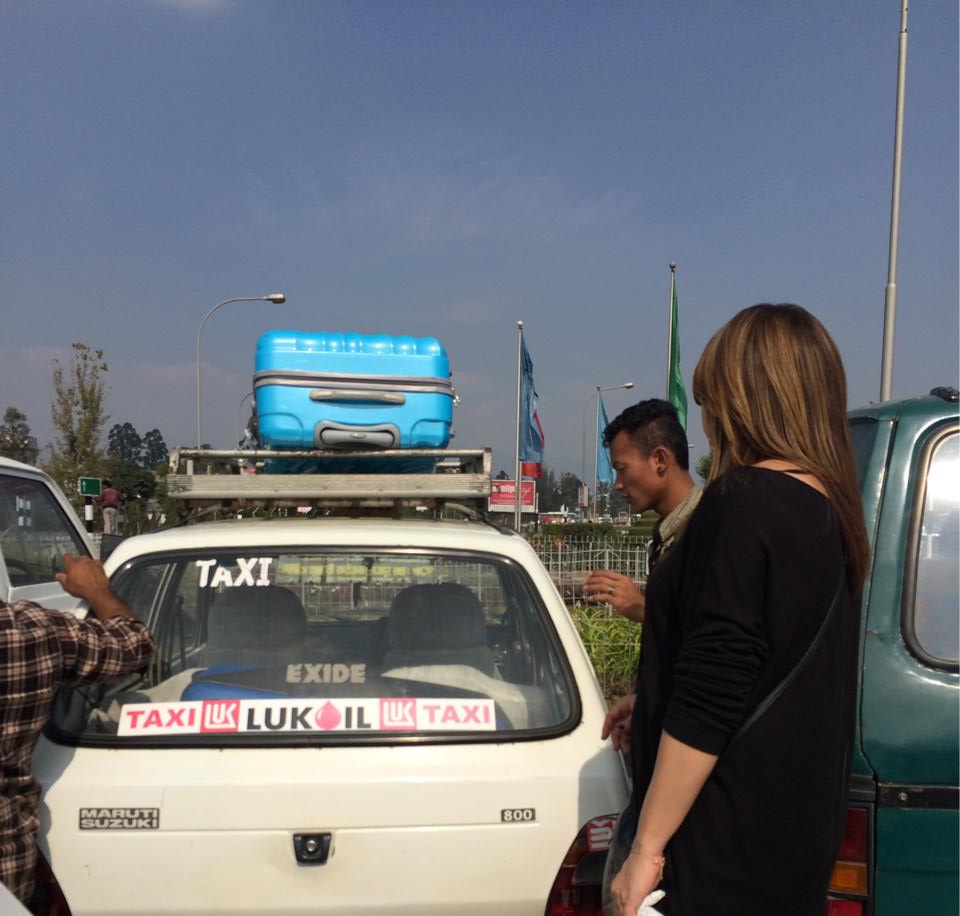 The car journey was fun, having been to Egypt on a number of occasions you get used to the constant beeping from passing motorists and it becomes just background noise as apposed to being alarming! However you aren’t so prepared for the madness of people just walking in and out of traffic and the volume of cars, bikes and random dogs in the road!

Once we arrived and following a nice long sleep we decided to venture out for some food and to change some money. Yasmine, being the exotic beauty she is, managed to flag down an admirer who agreed to be our evening guide!? (I don’t think she trusted my claims that I could be pretty streetwise and could manage to find us a cash machine!) Cue Jade as the third wheel on what felt like a very bad episode of Take Me Out!  Although Fernandos was a very long way from where we ended up.

After a lovely meal and a couple of much needed glasses of wine, we decided to call it a night and headed back to our room for a onesie party and some girlie gossip!

We have an early start in the morning ready to get the bus to Pokhara.