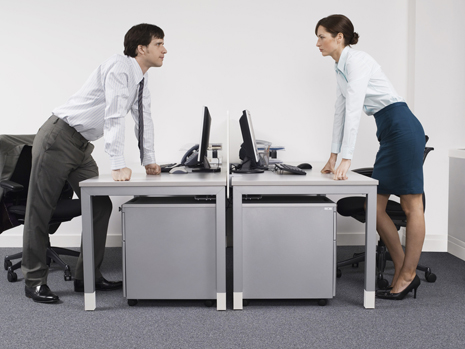 It is widely accepted that the open-plan office originated in Germany in the 1950s. The office landscape – Bürolandschaft – concept led to the banishment of the once-popular exam-hall style rows of desks to make way for a less regimented approach to workspace. An unfortunate side-effect however, was the creation of a problem that still exists today, that of workspace status anxiety.

According to cultural anthropologist Elizabeth Briody, one of the most obvious factors affecting preferred desk location is natural light. There are many instances of junior staff beginning their office careers at desks located in inner areas with restricted light and moving out towards the light as they climb the career ladder. Ms Briody believes a good desk is one which is sufficiently quiet to enable one to work undisturbed, so desks close to gathering points such as the coffee machine or water cooler, or those adjacent to busy thoroughfares are subsequently less desirable. Desks near printers and toilets are particularly undesirable.

The positioning of desks in the office is almost always hierarchical, often more informal than formal says Mike Phipps of consultancy Politics at Work. He believes it says a lot about who is in and who is out of the boss’s inner circle. Even so, a good location is not necessarily about sitting a stone’s throw from the boss, which while good for developing your relationship can also increase pressure not to mention your workload. Better to be a few desks away from the boss, close enough to catch his eye if need be but not directly under his nose.

If you are in the unfortunate position of being seated at one of the less desirably located desks it may be possible to relieve some of the associated physical problems. Auditory interference can be combatted by the use of white noise machines or headphones while plants and screens can reduce visual diversions. According to Ms Briody, it is often the case that someone moved to a less than ideal location can grow to like their desk so much that the prospect of then moving from it at a later date fills them with dread. Familiarity in this case can breed serenity and contentment.

If you have a hankering to relocate the best opportunity could be the departure of a colleague. In this instance, unless strict protocol intervenes, it is advisable to stake an early claim to the better located desk, ideally by first informing your boss and then upping sticks and moving in. If you are already established at a desk it will be much easier to lay claim to it.

Hot-desking layouts make for the most curious and fluid desk hierarchies. In theory hot-desking should be a free-for-all but there will always be the staff member who has one particular desk they prefer to frequent and often others will steer clear of that desk out of respect for this person. Challenging such a creature of habit could prove of benefit however if you are sufficiently assertive and confident. Such a display in front of your peers can be a fast-track to improved status based on the laws of primal psychology.