With World Cup 2010 behind us, at least one English footie fan can celebrate having beaten thousands of hopefuls from across the world to finish top of the league and winning the online BE-Ball competition.

Business Environment, in association with Property Week, helped bring a taste of World Cup glory to British offices this summer with their online penalty game. BE-Ball players took penalties for points and Anthony Portno from our business centre in Bristol has been crowned the lucky winner, bagging a new Apple iPad.

As World Cup fever swept the globe, BE-Ball (www.be-ball.co.uk) saw players from all over the world competing by taking penalties against colleagues and friends to clock up points. From Japan to Australia, nearly 10,000 games were played with Anthony sealing his victory with an impressive winning score of 2,505,690.

Anthony Portno said of his win: “I’ve been based in a Business Environment office for over a year now and am always impressed with the different fun initiatives they run beyond the very efficient operation of the office facilities.  When I saw the BE Ball promotion, I told my daughter she could have the iPad if I won and she is so excited about it.   It was a fun game and I enjoyed a good battle with another Business Environment customer who deserves a mention for keeping me playing during most of the World Cup matches I was watching!”

David Saul, Managing Director at Business Environment, commented: “BE-Ball was about having fun during this World Cup tournament and we certainly had that – we are delighted with the success of the game and Anthony’s impressive win meant at least one World Cup victory for England!” 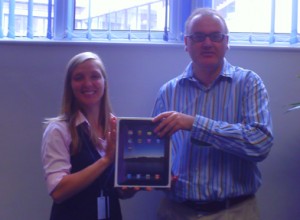