Only 15% of employees want to work from home full time

Only 15% of employees want to work from home full time 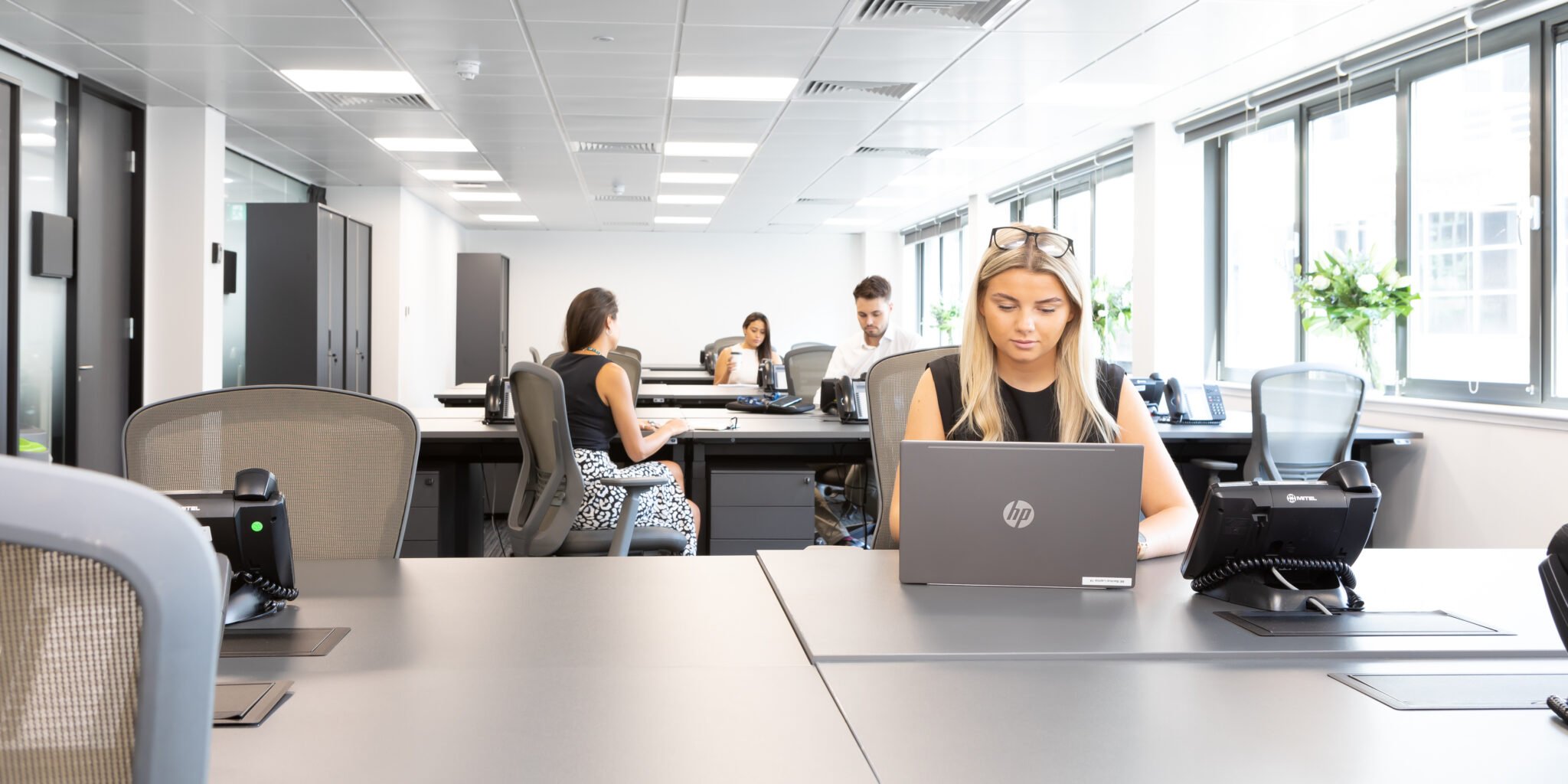 Research commissioned by the British Contract Furnishing Association reveals that in a post-COVID world, while workplaces will not ‘return to normal’, most companies are against their employees working from home permanently.

The report, published on the 14th October, was compiled using data collated from other publicly available studies. It looks at the future of the office and office workers and confirms that the office is an integral part of British working life and it’s here to stay. Indeed, despite workers having adapted well to remote working, only 15% of employees want to work from home full-time.

While the findings warn that workplaces ‘will not return to normal’ when the pandemic is brought under control, it does describe as ‘misplaced’ the speculation that the office is dead.

Pre-Covid, digital disruption had already affected both the economy and our daily lives, with an increase in tools to help support and facilitate homeworking. The pandemic has fast-tracked the adoption of these tools thereby accelerating the pre-existing trend towards flexible working.

It is recognised, however, that there are genuine constraints around homeworking, in terms of health and safety, insurance and data security, not to mention technology limitations such as Wi-Fi or VPN issues. In one survey, 37% cited Wi-Fi problems as having a detrimental impact on their ability to work, 35% had problems with video conferencing software such as Zoom. 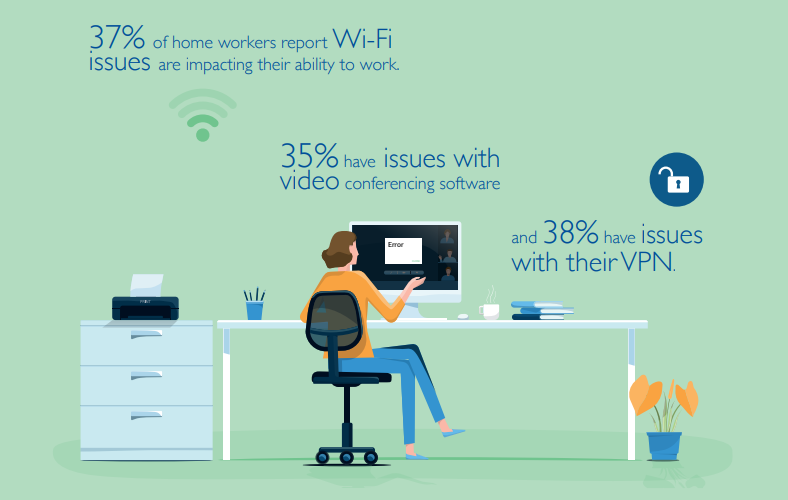 Wellbeing is a key factor. According to the report, 41% of employees working from home have seen an increase in stress levels, mainly due the worry over how their productivity is viewed by managers. One study found that 46% of remote workers feel under pressure to prove they are actually working, for example by making sure they are ‘more responsive’ on email. Another study, by NordVPN, highlighted in the report, claimed that remote workers are typically adding two hours to each working day, equating to a whole extra working week per calendar month. For many, lines have become blurred between work and home life, with staff struggling to switch off, working later in to the evening and even at weekends. 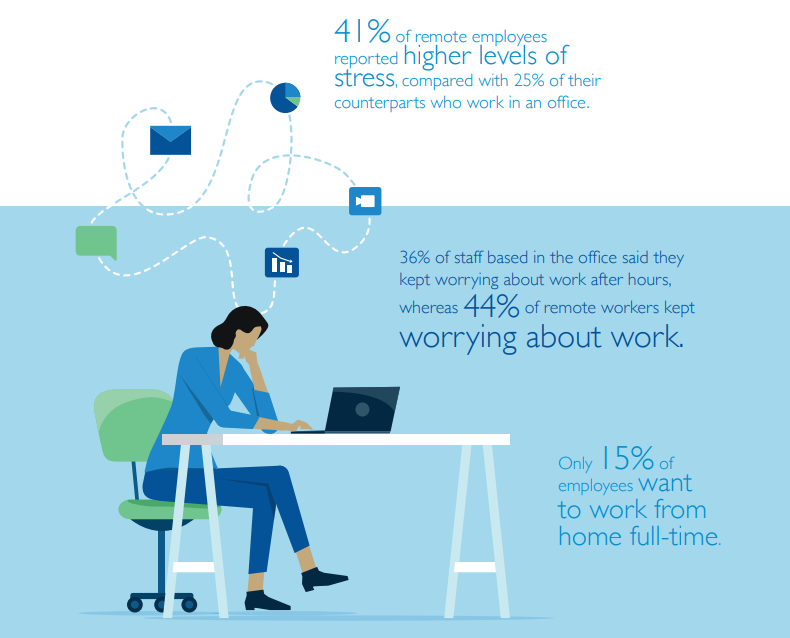 In addition there are concerns amongst employees about the lack of personal development opportunities, also not being able to have face-to-face contact with managers and feeling that their work is unappreciated. Loneliness is another major issue, with 30% saying they are struggling with working in solitude according to a study published by FinderUK. Isolation is known to be a driver towards disengagement among employees as well as adversely impacting mental health.

Then there is the question of workspace. Younger remote workers are less likely to have access to a proper desk and suitable chair, many having spent the last six months working on sofas, kitchen tables and ‘other unsuitable areas.’ 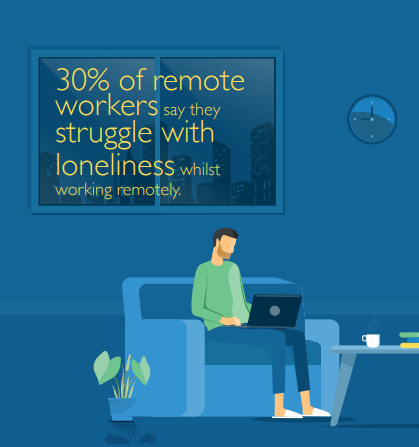 Collaboration is essential to a successful business and no amount of video conferencing will ever compensate for face-to-face contact, even while social distancing. Teams need the opportunity to come together in order to flourish and the office of the future will play a vital role in this.

Commenting on the study, Dr Craig Knight, a leading psychologist who advises companies on creating work spaces, said: “While people have adjusted to working from home well, significant numbers report struggling with loneliness and feeling under pressure to show constantly they really are working.

“The office is, and will remain, one of the key spaces for work.”

The report looked at organisations already reviewing their office strategy with many re-evaluating their requirements with a view to seeking more flexible workspace, while some large corporates, such as tech giants Facebook and IBM, are pulling back from home working models.

The overall view is that people are unlikely to return to the office in the same way as they did before, however, the office cannot be replaced when it comes to ‘building team culture, team cohesion, collaboration, and knowledge sharing.’ By their very nature, these work life elements depend on face-to-face contact.

In the opinion of the BCFA, ‘the future of work will see a combination of work in the office and remote working where businesses find flexible policies based on their own needs.’

The British Contract Furnishing Association (BCFA) is a business membership organisation representing firms within the furnishing industry. Images are courtesy of the BCFA report.